Which Spanish dialect should I use to get my videos dubbed for Latin Americans? 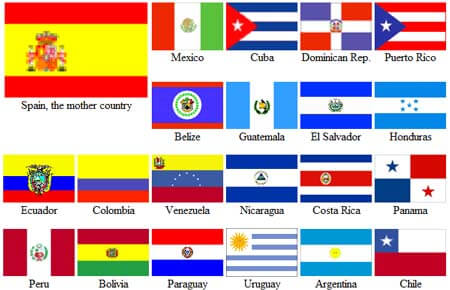 Many customers ask us which Spanish dialect should they use for their videos?
Since we would like to help all of our users to achieve the best results with their content, let us explain how to make this decision:

The world of Spanish is generally split into European Spanish and LATAM Spanish (Latin American Spanish).
The most important thing is to differentiate between Castilian Spanish (Spain’s Spanish, and also called European Spanish) and LATAM Spanish. It’s similar to how UK English and US English differ, as those languages also grew apart. Yet, with some effort, a UK English viewer could understand a US English video and vice versa, as the languages are basically the same.
This relates to where is your audience, and based on that, you can pick the specific Spanish dialect you need.

In Spain, the leading & official Spanish language is Castilian Spanish. There are additional dialects within it (like Andalusian Castilian, etc.), as well as additional languages / dialects of Spanish around Castilian (like Catalan, Galician, etc.). However, if you target the general population, in most regions of Spain, a Castilian Spanish voice, like Antonio

, will work best, and will be well understood within Spain.

If you target American Spanish speakers, you should make a decision on how wide would you like your initial audience to be. Another consideration might be a reuse your videos in several LATAM countries, and not a specific country.

Here’s an illuminating quote from a specific article about Spanish dialects from Wikipedia:

Mutual comprehension
“The different dialects and accents do not block cross-understanding among the educated. Meanwhile, the basilects have diverged more.
The unity of the language is reflected in the fact that early imported sound films were dubbed into one version for the entire Spanish-speaking market.
Currently, films not originally in Spanish (usually Hollywood productions) are dubbed separately into two accents: one for Spain and one for Hispanic American (using a Mexican or Puerto Rican accent without regionalisms).”

It is very rare, however, to do 2 Spanish LATAM dialects for the same content, even in the rich broadcast world, so once a LATAM dialect is done, it will be re-used all over South America.

So, to conclude, if you want to prepare content for a specific audience in South America, like Argentina, try using our Argentinian voice, Diego

.
If you would like to target the general population in LATAM, use a US Spanish voice, like Rodrigo

or a leading LATAM population, like Mexican Spanish (as it’s the largest Spanish population in LATAM), and use Juan

one of our Mexican voices, with a standard Spanish (i.e. avoiding country-specific slang).
If you must, and need to have a variety of voices in your video, you can try to mix between those dialects’ voices to create a large enough variety. We are also testing new technologies that enables us to mutate voices, and even shift their gender, e.g. from one female voice we could create a male voice, and vice versa, as well as create several distinctive variations that would sound like different persons… Exciting, isn’t it?

You can listen to the complete library of our voices, on our voices gallery, and pick your favorites for your Spanish project, right there.

Here’s a sample from a case study we did for UFAI, a medical client, that wants to target LATAM / US Hispanic audiences:

Using our platform, we could prepare him a variety of testimonials, like this one, in a variety of LATAM Spanish dialects, and offer a more authentic voice to the patients (than the common solution, used in traditional dubbing studios, where one dubber does all of the testimonials). It actually makes sense that not all of the patients of this large chain of US medical facilities, will speak in the exact same dialect, or voice…

As we always say, if you’d like to achieve the best localization results, use dubbing. It will improve your video viewing rates tremendously, within the Spanish speaking world (according to TGI Latina’s research). If you can translate your videos’ content, and prepare the translated subtitles by yourself, our online SaaS app provides a great way to dub your content, and with less than $5 per minute, it is a powerful way to reach new markets, and make video dubbing affordable to anyone.

No problem. If you do not have subtitles for your video, our professional services team is here to help. Check out our full-service offer by filling our Instant Price Calculator, and get the professional results you want, without the effort.
Our team of linguists will do all of the work for you, including transcribing, translation, dubbing and full QC (quality check) of the your dubbed videos.
And it will still cost you a fraction of the cost of ordering it from a standard dubbing studio…

If you liked this post, and would like to receive further tips, guides and ideas from us, be sure to register to our newsletter.

The sidebar you added has no widgets. Please add some from theWidgets Page